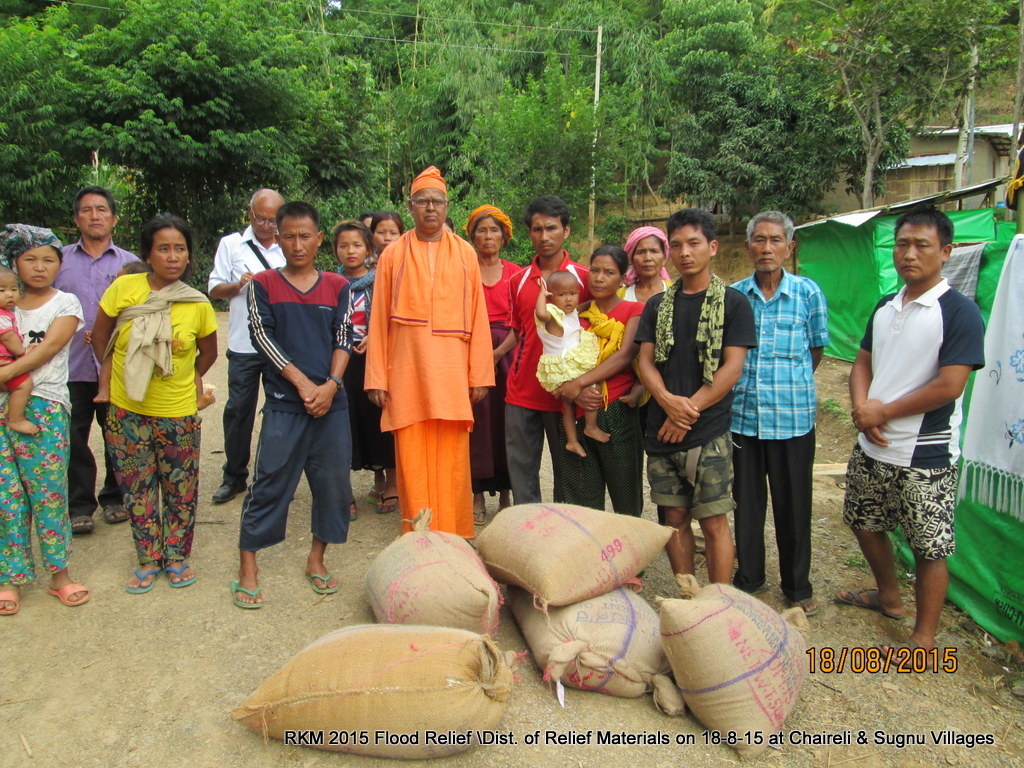 In July 2015, heavy floods in the Thoubal district wreaked havoc on life and property and many people were rendered homeless. The authorities of Ramakrishna Mission, Belur Math, asked Swami Nareshananda, who had already been selected to take charge of the future Ramakrishna Mission centre in Manipur, to conduct immediate relief services, so as to bring some solace to the affected people.

Inspite of being aware of the agitation and unrest going on at that time in connection with IPL movement, he still decided to come over to Imphal, along with an assistant monk, to get first hand information of the situation and to find out the best possible means available, to provide some relief to the affected people. Knowing the plight of the monks and of their noble intention to conduct relief, Hon’ble Justice N. Kotishwar Singh extended help to accommodate them and arranged for their stay in the Manipur High Court guest house.

The survey of the affected region, distribution of beneficiary cards and the relief materials, were conducted from 7th to 18th August, 2015, with the financial support from Ramakrishna Mission, Belur Math. In all 14,646 kg. of Rice, 1,190 Kg. of pulses, 1,545 kg. of salt and 1545 kg. of edible oil were provided to 1,815 flood affected families of Nungoo, Khyongyam, Tongjeng Khunjoo, Wangoo and Chairel villages in Thoubal district, situated nearly 75 kms away from Imphal.

A Medical Camp was also organized at Wangoo village – Thoubal District on 11.08.2015 and about 750 patients were served, most of whom were affected by various skin and respiratory diseases. Medicines worth Rs. 52,340/- were distributed. Around 12 doctors and 15 Paramedical staffs mainly from RIIMS and JNIMS hospitals of Imphal.

A total of Rs 5,17,644/- were spent on the relief work, which were fully borne by the Headquarters of Ramakrishna Mission, Belur Math.

The vehicles were arranged from the office of the Hon’ble CM of Manipur and police security team was provided by the District Administration for the smoothly conducting the relief camps. The Deputy Commissioner of Thoubal district appreciated very much as this is the first time, such kind of relief works was undertaken in an organised way.

Thus, the first relief work in Manipur under the aegis of the Ramakrishna Mission, Belur Math, brought appreciation from all quarters and the Hon’ble Chief Minister too, expressed his satisfaction at this noble act of selfless service by the monks of the Ramakrishna Order.